A view from the field: Guest blogger Danny Osborne shares. This month brings to an end a five-year National a Striving Readers Grant.  Recently I invited one of the participating principals to share his experiences and how his role as a principal has been impacted by his participation in the project. This week’s Guest Blogger […]

A view from the field:

This month brings to an end a five-year National a Striving Readers Grant.  Recently I invited one of the participating principals to share his experiences and how his role as a principal has been impacted by his participation in the project.

This week’s Guest Blogger is Danny Osborne, who was the Principal of Virgie Middle School in Pike County and who is now the Principal of Owen County High School. Here’s what he chose to share:

I had been a Principal for three years prior to being introduced to Adolescent Literacy through the Striving Readers project. Shortly after this introduction, I became an Instructional Leader!

I had always worked hard…making sure everyone was where they were supposed to be, that the students remained in class and obeyed all school rules, that everyone had everything they needed to be GREAT!!! I thought everything was going just as it should. 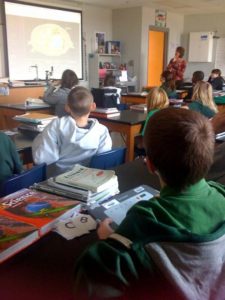 Even in the beginning of the Striving Readers project, I was still in Principal mode – I laid all the responsibility on my Literacy Coach (I called that delegation) and continued with my Principal responsibilities. It was only after I discovered that the Adolescent Literacy Model wasn’t being implemented at high levels that I came to realize the extent that things really weren’t going just as they should.

By nature I’m a competitive individual, never willing to accept failure as an option. It is with this spirit that I approached the CTL staff with the question, “What can I do to make this work?” Their answer changed me forever and turned me into an Instructional Leader.

Amy Awbrey’s, “What gets monitored, gets done,” statement will forever be seared into my memory.  I knew that in order to make this work, in order to quench my competitive drive to succeed, I had to monitor that our teachers were actually doing what they were putting on paper. Prior to this I had visited classrooms frequently, making sure all was well – teachers are teaching, students are learning, where as now, now I had a specific focus on what I was looking for. My visits became intentional; conversations became focused on instruction.  I was on my way, but still had a ways to go.< How could I identify great instruction or how could have the type of growth conversations I needed to have without sufficient knowledge in Adolescent Literacy? The answer is – I had to become the expert in my building – I had to become the Instructional Leader, not our literacy coach, not our department heads, but me.

Now, with a newfound confidence, I was in classrooms more frequently with an intentional focus on what was expected to be going on, I was knowledgeable about the six sub-domains of literacy and what they looked like in practice, I was able to guide our teachers in a specific direction, and most importantly, I was able to model in faculty meetings and classroom setting