What can happen to a girl when she is lucky enough to have teachers who see her gifts, even when others who have known her longer don’t? This is something that every young person deserves. Here’s a story that taught me a lesson: My good friends Patty and John are preparing to take their daughter, […]

What can happen to a girl when she is lucky enough to have teachers who see her gifts, even when others who have known her longer don’t? This is something that every young person deserves. Here’s a story that taught me a lesson: 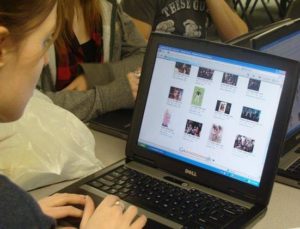 My good friends Patty and John are preparing to take their daughter, Nora, off to college today. As I write this, they are packing the van with all the sundry things a young woman needs as she prepares for her first year of college and shared dorm life. Amid the desk lamps, Japanese paper lanterns, and guitar case sits a thin laptop computer. This computer figures mightily in the life of Nora as she sets off.

From the time she was a small child she loved putting together performances for all to view. She was an avid consumer of performance including many movie genres. I remember her, at an early age, using the language of live action and animation to distinguish between the types of movies she was watching.

So, it came as no surprise when she started making her own movies for school assignments and later got involved in the 48 Hour Film Fest. As a high school junior Nora attended the Governor’s School for the Arts in the Media section. She was also a performing dancer and singer. She visibly had the sensibility of an artist.

In my mind, it was clear that Nora could be pegged as the creative type who would pursue all things arts related. I didn’t think we had to look any further. So, how did she end up at the Google Computer Science Summer Institute (CSSI) in the summer between her high school graduation and freshman year of college? I might add, to the envy of all around her.

Here is where the lesson is brought home to me. When Nora was a high school sophomore her math teacher saw something that led her to suggest she take a computer programming class her junior year. This was something that had not occurred to her. In fact she was considering a class on fashion design. Her math teacher persisted and encouraged her, saying,” You have a mathematical mind, you should try programming”. Nora did not consider herself to be in possession of a mathematical mind, but since her teacher was so supportive and encouraging she decided to take a risk, challenge herself and give programming a try. And, as it turns out, she did have a mathematical mind and a real aptitude for programming. Her teacher recognized something in her that had been invisible to others, including Nora.

Her programming teacher nurtured her ability in programming with ample skill and encouragement. Then she took another programming class her senior year. And, again a teacher took notice of her and urged her to apply to GOOGLE camp. After the application process and phone interview she was accepted and spent three weeks at the Googleplex in California. During her time at Google, she created an app for a smart phone; learned the Python programming language; and collaborated with two others to design an app for a website. (You can see this applet, which encodes and decodes text here).

As she begins her college life, she has enrolled in an advanced programming class. While she hopes to one day intern at Google, she is attending a strong liberal arts college with the possibility that other new horizons of gifts and interests will open up for her. Perhaps, her interests in the arts and programming will come together because, after all, they are not so far apart. As Donald Knuth, a renowned computer scientist has said, “My feeling is that when we prepare a program, it can be like composing poetry or music…”

This story reminds me to work constantly to cultivate an ability to see and imagine what’s possible for myself and others. To take the time to see beyond the obvious. This is particularly urgent with our students who may appear disengaged without clear aptitudes. We need to take the time, open our eyes and see beyond the surface. We need to help them to see their possibilities that may not yet been realized. Difficult in the day-to- day press of the classroom and accountability to standards yet what a world this would be if all children had teachers who noticed and nurtured their students as Nora’s teachers have done for her.