By Dr. Deborah Walker: Several years ago I attended a meeting in Washington, D.C. for Promise Neighborhoods awardees along with our partners and project leads from Berea College. Geoffrey Canada, architect of the Harlem’s Children Zone was the guest speaker...

This is one of a series of posts leading up to CTL’s 20th Anniversary forum and celebration, September 9th at the Muhammad Ali Center in Louisville, KY. 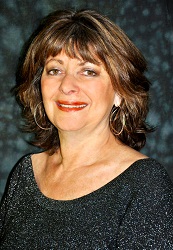 Several years ago I attended a meeting in Washington, D.C. for Promise Neighborhoods awardees along with our partners and project leads from Berea College.  Geoffrey Canada, architect of the Harlem’s Children Zone was the guest speaker, since his efforts to develop a systems approach to underachievement provided the impetus for President Obama’s Promise Neighborhoods initiative.  Mr. Canada traced the evolution of his ideas to boost school effectiveness and student achievement, describing factors that have an impact on student preparedness for and success in school, such as lack of kindergarten readiness, low expectations, inequitable resources, teen pregnancy, parents without a high school diploma, and limited economic opportunity.  When pressed about how to close learning gaps, he quipped: Just do what the rich folks do for their kids.  Of course everyone laughed but that idea stayed with me, as it seemed to describe the crux of the problem.  Students in more affluent communities have a wealth of resources, not only financial but also in the form of arts-based experiences, camps, museums, and after school and summer learning opportunities.  The After School Corporation produced an infographic entitled “The 6,000 Hour Learning Gap,” highlighting the advantages of middle class students over their counterparts born into poverty by the time they reach 6th grade.  The 6,000 hours are figured by adding up the hours that middle class parents read to their children, have them attend pre-school, after school and extra-curricular activities, summer learning and field trips, concluding that “learning time is a resource that is unequally distributed.” 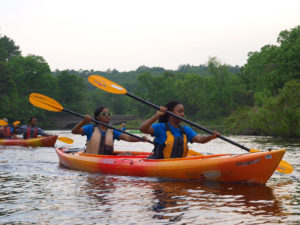 In an article for the Philanthropy News Digest, Time to Put Poverty Back on the Education Reform Agenda, Southern Education Foundation President Kent McGuire noted that time was one of the factors that educators could use to level the playing field for poor students if used in innovative ways.  There is some synchronicity at work here: having read Kent’s article again a few days ago, I also ran across a second piece that talked about using time to reduce summer learning loss for poor children, not by enrolling them in summer school but by engaging them in the kind of learning rich activities that affluent students regularly engage in: How a Better Summer Vacation Could Help Low-Income Kids in School, by Libby Nelson.  These activities include “the trappings of summer camp—horseback riding or kayaking or sand volleyball, and also the reading and writing activities, such as putting on plays, more common in wealthy  students’ summers,” and are shown to have a positive impact on students academic, social and emotional development.

Equity is staging a comeback as part of the national reform agenda.  According to KY Commissioner of Education Terry Holliday (Closing the Opportunity Gap), Education Secretary Arne Duncan has advised states that by April of 2015 they must submit an educator equity plan to ensure that every child has access to a quality education and quality educators.  The plan addresses teacher preparation, allocation of resources and leadership development.  Duncan explained: “family income and race still too often predict how likely a child is to attend a school staffed by great educators.  This inequity is unacceptable, and the time is now for us to work together to ensure all children have access to the high-quality education they deserve…” What Duncan is requiring of states will address some of the issues posed by poverty, but could go further in looking at those experiences that prepare middle class students for success and ensuring that low income students have those same experiences.

I thought back to the summer experiences my own children had, not only traditional camps through the YMCA, but Camp Shakespeare offered by the KY Shakespeare Festival where students learn about Elizabethan drama and 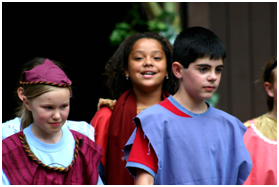 history, create costumes and sets, and perform scenes from plays like Taming of the Shrew, Macbeth, and Romeo and Juliet before a live audience at Central Park (my daughter played Mercutio among other roles); or historical camps at Locust Grove, home of George Rogers Clark, where students learn woodworking and how a farm operated hundreds of years ago.  Taking the kids on vacation, visiting the Children’s Museum in Indianapolis, enrolling in the library summer reading program—all play a role in developing children’s literacy and thinking skills, as well as their aesthetic sense and their understanding of the larger world and its possibilities.  The time spent engaged in these activities is not wasted time, as critics of long summer breaks often suggest.  Instead, the time spent in summer enrichment gives students alternate and unique ways of learning that appeal to their sense of fun and adventure, and that help them develop self-efficacy.  Why shouldn’t these same activities be made available to students of poverty, increasing their time spent learning and broadening their experience and knowledge in ways other than direct academic instruction in summer school? As an example, one promising practice that has been implemented this summer through Metro Government is issuing a Cultural Pass, available through the public library and Metro parks, that admits a child through college age (or a child under 16 and an adult) to the Louisville Zoo, Bernheim Arboretum, KY Museum of Art and Craft, Crane House/Asia Institute, Frazier History Museum, Historic Locust Grove, KY Shakespeare and other cultural venues.

At the heart of the concept of equity is to want for all children what we want for our own. Stated another way, those in-school and out-of-school experiences that develop students’ capacities to learn must be made available to all students, not just those in affluent schools but those who on a level playing field have the same potential to achieve and excel.

Visit our 20th Anniversary event page for other related blogs and information.