Was Life in the Middle Ages Really a Fairy Tale?

Guest Blogger Stella Baker is an English Language Arts teacher at Owsley County Middle School. She has been teaching in Kentucky schools for 29 years. Over that period of time she has taught a variety of subjects and grade levels, but has always returned to middle school English, which is her niche. In her spare […]

Guest Blogger Stella Baker is an English Language Arts teacher at Owsley County Middle School. She has been teaching in Kentucky schools for 29 years. Over that period of time she has taught a variety of subjects and grade levels, but has always returned to middle school English, which is her niche. In her spare time Mrs. Baker assists with the academic team and after school tutoring. She strives to encourage all students to become better readers and develop a love of literacy. During the summer of 2013, Mrs. Baker attended the 3 day training Inquiry Inside of the Common Core State Standards Instructional Shifts as part of foundational literacy services provided to Promise Neighborhood English Language Arts teachers in eastern Kentucky by CTL. The following blog is the first of two written by Mrs. Baker to reflect on the process of designing an inquiry-based approach to teaching.

It all started at a summer CTL workshop. English and reading teachers from three counties were gathered together in a room working diligently to begin unit planning. I had been given the task of designing a unit complete with a summative writing task. This was nothing new to me; as a teacher for 29 years I had written units and writing tasks before and was fairly familiar with the process, but what was about to happen would lead me on a roller-coaster adventure for the next several months.

I suppose that it all really started weeks earlier when my middle school colleagues and I sat down during a Professional Learning Community (PLC) to examine the curriculum that we had taught over the course of the 2012-13 school year.  Our social studies teacher discovered that she had taught the world history curriculum that she had planned, with the exception of the content related to the Middle Ages. The problem became the fact that these same students would be taught American History in eighth grade, setting the Middle Ages content aside until high school. I had a brainstorm! My informational reading unit is usually the first big unit of the school year. What if I used reading material about the Medieval period as the basis for that unit? This seed of an idea began to germinate in my head; it sat there for three or four weeks until I casually mentioned it at that summer CTL workshop. It was then that someone said, “Why not have a Medieval Fair?”

I liked the idea, so I began working on the bones of the unit. The essential question came easily, “Was life in the Middle Ages really a fairy tale?” Coming not so easily was the skeleton of the planning itself. What would I need to do? What would my students do? Who else did I need to involve in this? What timeline was I actually talking about? Who would our audience be?  I began writing all of these elements on a calendar, planning each week tentatively. I contacted the instructional supervisor so she could begin thinking about the culminating event, our big Medieval Fair. I emailed the social studies teacher to see if she might have some reading materials that might be useful and kept running the entire thing through my brain. By the time school actually started I was prepared to begin the unit, even though I was still feeling tentative about the entire thing. After all, this was probably one of the largest projects that I had undertaken in all of my 29 years in the classroom. 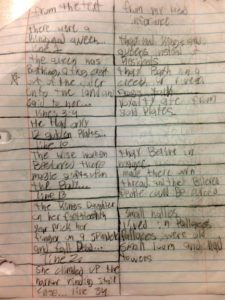 To begin the unit I had each of my classes read a fairy tale that was set during the Medieval period. As they read, they used a dual entry organizer to document evidence from the tale that helped them make inferences about life during that time period. Following the reading, students used pair/share to discuss their findings. Each class then did whole class sharing and created a wall chart that documente 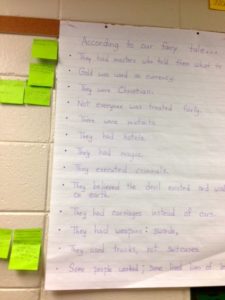 d what life was like according to the fairy tale they had read. These charts would hang on the wall throughout the remainder of our unit.

The next part of the unit was basic reading instruction: main idea, supporting details, summaries, etc. As soon as I felt comfortable with the abilities of my students, I placed my students into small groups. Students provided input in the grouping, identifying 3 students they would LIKE to work with and 3 students they would prefer NOT to work with. I used this information as I created the final groups. Then each of the groups selected a topic from a prepared list of cultural elements that we wanted to include in the fair.

(A subsequent blog will follow outlining the remainder of the process and its outcomes, along with a post-implementation reflection by Mrs. Baker.)