Sitting with Van Gogh: Thoughts on Arts and Learning

Lately, Vincent van Gogh has been consuming my waking and sleeping hours. Over the holidays I saw an art exhibition, Becoming Van Gogh at the Denver Art Museum. My sister in law purchased the tickets and invited me to see the show with her the Saturday before Christmas. There have been many Van Gogh shows, […]

Lately, Vincent van Gogh has been consuming my waking and sleeping hours. Over the holidays I saw an art exhibition, Becoming Van Gogh at the Denver Art Museum. My sister in law purchased the tickets and invited me to see the show with her the Saturday before Christmas. There have been many Van Gogh shows, it seems like there is always one somewhere and I have been fortunate to see a great deal of his work, both in the US and in the Netherlands.

I was not particularly enthusiastic about attending another Van Gogh show, particularly on the Saturday before Christmas when there were sure to be overflowing crowds and shoulder to shoulder viewers, (the show was, in fact, sold out). I knew nothing about the show including the fact that it was taking place. But what a revelation it was both for the works that were exhibited and for the way the show was organized. It was well worth the jostling to get a view of the drawings and paintings in the crowded galleries and to read the large informational panels that accompanied each section of the show.

According to the museum press release,

By focusing on the stages of Van Gogh’s artistic development, Becoming Van Gogh illustrates the artist’s initial foray into mastering draftsmanship, understanding the limitations and challenges of materials and techniques, learning to incorporate color theory and folding a myriad of influences, including the work of other artists, into his artistic vocabulary. No other exhibition has focused so intensely on Van Gogh’s personal growth and progression as he developed his own personal style.

When I ask students what they know about  Van  Gogh, prior to sharing one of the artist’s paintings with them, they often say he was the crazy artist who cut off his ear. The idea that Van Gogh was a madman who lobbed paint on canvas in obsessive reverberating arcs is certainly debunked in this show. The Denver show illustrates that Van Gogh was an artist with a singular vision and dedication to becoming better and better at this craft. This show doesn’t indicate insanity, it tells the story of an artist who came to painting late (age 27); shows us  a man who  worked doggedly at learning how to draw (his early drawings were awkward); studied and learned from other artists; and an artist who employed interesting ways to  learn about color and perspective.  Ever improving, Van Gogh valued the technical aspects of his craft and was persistent in his study. He met his limitations head on.

What follows are some of the things I learned from the exhibition:

In this way he was able to sketch the objects that corresponded to the sections of the perspective frame providing the picture he was working on with accurate depth and proportions.

Somehow Van Gogh hit upon a way to experiment with color by winding different colors of yarn together. This astonishingly simple, cheap, and yet effective method kept the colors separate, just as Van Gogh kept his colors separate on the canvas in short, side-by-side brushstrokes of unmixed paint. 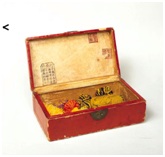 The organization of the show with paintings and drawings interspersed with large wall size panels that provided information about the major areas of Van Gogh’s development as an artist was very effective and educational.  Each panel provided information about the self- directed learning Van Gogh engaged in as he developed as an artist. The panels combined information about the techniques and classes he used with anecdotal stories and quotes from the artist’s voluminous cache of letters and journals.  These educational panels helped make Van Gogh’s thinking and learning visible and represented the work thematically. This is something I want to remember as I think about ways to showcase the work of students and find ways to help make their thinking visible.  Vincent van Gogh became my teacher in absentia through the Becoming van Gogh show at the Denver Art Museum, I am glad I went.