School sports, especially football, are an American high school tradition. But should they be? A recent piece in The Atlantic raises some important questions. Is there a way to balance the positives of school athletics with the... 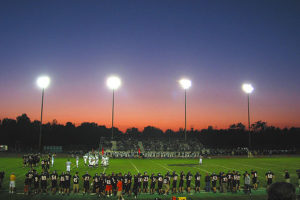 It’s fall. The temperature is crisp, and the leaves are turning bright. On any given Friday night at almost any high school in the United States, the air is filled with the sound of cheering, marching bands, the thunder of cleats and, hopefully, only the occasional crack of helmets making contact as American teenagers take to the football field. Attending football games was part of my public high school experience in the suburbs of Philadelphia, Pennsylvania. Gridiron Fridays were part of my experience as a parent of two children who played in the marching band at their public high school in Louisville, Kentucky. It was fun for the fans and musicians; presumably it was fun for the young athletes on the field. And valuable! They were learning about mental and physical fitness, teamwork, commitment and intensive practice and performance–all endeavors educators strive to provide for young students because they also happen to be critical for success in the world of work and in life.

But. You knew that was coming. A recent article in The Atlantic by Amanda Ripley lays out a major “but.” Once an avid high school soccer player herself, Ripley explores the notion that American high schools spend way too much money on sports, especially football, compared with what they spend on academics, and that students, and indeed all of American education, suffers as a direct result. In one of the most striking facts presented in the piece, Ripley notes that at a high school in a small rural Texas town, the per student expenditure for football was $1300, while the per student expenditure for math was $618. At the same time, according to Ripley, the school was about to be shut down by the state for financial mismanagement and academic failure. Was, that is, until a new school superintendent shut down the athletic program at the school instead, with the blessing of teachers and coaches who recognized that without such drastic measures, they could lose the school altogether.

A few students transferred out to play sports at a nearby high school, but most stayed on. And by the end of the first semester, 80 percent passed their classes–compared with 50 percent the previous fall. Ripley notes that other improvement efforts were also in place at the school, and of course a single example might well be an outlier. But the academic transformation on the heels of the cancellation of school sports that Ripley cites should give pause to anyone pondering how to boost instruction and performance in American high schools.

What are your thoughts about school sports? What do they add to a youngster’s total school experience? What might they compromise in that experience? Is there a way to balance the positives of school athletics with the potential downside? Share your thoughts, and we’ll continue to explore this intriguing, no doubt controversial topic in a future post.