Difficulty of Sustaining Change in Education

I have been reading several blogs recently and have to say that I am impressed with much of the thinking that is being expressed in the blogosphere currently. I think Mind/Shift is promoting some good shifts in instruction regarding the potential impact of the Standards of Mathematical Practices from the Common Core, and I really […]

I have been reading several blogs recently and have to say that I am impressed with much of the thinking that is being expressed in the blogosphere currently. I think Mind/Shift is promoting some good shifts in instruction regarding the potential impact of the Standards of Mathematical Practices from the Common Core, and I really like Edutopia’s push to increase student engagement through more intentional discourse (I think getting students talking more than the teacher is a wonderful thing!). There are a lot more out there but I just wanted to name a few. I’m, also, a big fan of Nick Provanzano over at the Nerdy Teacher. I think he is a smart, reflective teacher, but I was a little disappointed in a post he wrote for Smart Blogs for Education, Searching for the Right Way to Teach. Nick’s initial premise was,

“A wise veteran teacher told me something my first year of teaching that I will never forget, “Every few years, someone is going to tell you how you teach is wrong. Approach X is the best way to teach. A few years later, someone else will tell you how awful that approach is. It’s all BS. Teach to the students in your class and you will always be right.”

I don’t disagree with what the veteran teacher said (we throw lots of shiny objects at problems rather than making an informed decision and sticking to it), but I do struggle with the issue that so many students in our schools are failing to be successful. I can’t and won’t put all of the blame on the students. We know from research that teachers are the biggest single influencer (outside of family) of student success in school. Yes, I’m aware there are lots of influencers, but we as teachers love the fact that we (when we do our job well) are potentially the most positive influencer of student learning. We have to step back then and acknowledge that we aren’t being very successful. Additionally, we may think we are teaching to the students in our class, but we in fact may not be.

In Nick’s post he goes on to describe his adjustments to his instructional style to make sure that he is teaching to high standards for his students. Nick described two things he does and doesn’t do (“I give homework in my classes “, “I do not give multiple choice exams in my classroom”) that I often don’t and do see. Nick has chosen to use project-based learning (PBL) in his classroom and based on my reading of Nick’s blog and seeing him present at ISTE, I would say he does very well. He doesn’t espouse PBL as a cure all and he does make a great point that there are as many different learning styles in a classroom as there are learners and different approaches have a place in classrooms. I wish more teachers were like Nick in that when they saw that they weren’t meeting the needs of their students, they adjusted their approach to be more effective. 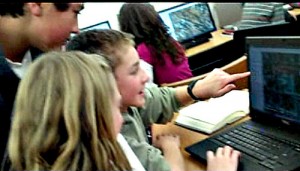 I think where I really struggle with this post is not the post itself as much as the way we in education don’t work professionally. If doctors were only successful treating 27% of their patients (yes, I’m aware of the limitation of this analogy), they would be out of a job pretty quickly because people would go somewhere else. If any company didn’t look at the data that was available to it and make changes to its operations based on the data, it would go out of business (yes, again another clichéd analogy). I think, we in education, need to look at the data and we need to hold ourselves accountable for changing. It will take a great deal of effort and yes to Nick’s point more than two or three or four years in sticking with the effort.

Maybe the flipped classroom isn’t the answer, or PBL or lecture, or maybe there isn’t any one correct answer, but using that as a premise to continue doing the same old thing is not acceptable either. I don’t always agree with the charter school movement, but I will say I do agree with creating a school that has a vision and allowing that vision to be enacted. I wish more schools had a vision rather than just existing. I hope the instructional reforms that I’m reading in the great blogs mentioned above continue to influence instruction in the classroom in a positive way!