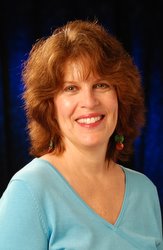 “At CTL, I get to work in areas that have always been my professional and personal passions—writing and communications, education, and the arts.”

Barb has more than 30 years of experience developing, writing and evaluating educational print and video for the producers of Sesame Street in New York and for Kentucky Educational Television, and as an award-winning writer for Louisville Magazine and other publications. She has taught classes on writing and mass media for children and teenagers, and conducted workshops for teachers on classroom use of video.

At CTL, Barb consults on communications and general research, and assists with the development and production of online, print and video materials, including videos for Berea College GEAR UP, and the Parent College Toolkit and DVD for GEAR UP Kentucky. She has also designed, coordinated and led full-day workshops for parents on helping students to prepare for postsecondary education, as part of the statewide GEAR UP Alliance Institute for a College Going Culture.

She began her career developing and writing for educational media projects in her native Philadelphia, and as a high school English teacher in Pennsylvania and Massachusetts.  In addition to her work on staff and as a consultant in audience research on national and international projects for the producers of Sesame Street in New York, Barb was a writer and content designer for Kentucky Educational Television’s nationally broadcast GED Connection series and award-winning Arts Toolkits.  She has also worked on the development and evaluation of arts education programs for the Kentucky Arts Council and the Kentucky Center for the Arts.

Since 1988, Barb has been a regular contributor to Louisville Magazine in the areas of education and health, and has received 12 Louisville Metro Journalism Awards from the Society of Professional Journalists for her articles. She has also written for U of L magazine at the University of Louisville, and nationally for Parents Magazine. Recently, she has consulted on the development and evaluation of educational webcasts for young students by the Detroit Symphony Orchestra.

Barb’s other passion is the arts. She has performed professionally in musical theater since she was a teenager, and appears locally with CenterStage.  She and her husband, David, have a grown son and daughter, and love to travel and bicycle.